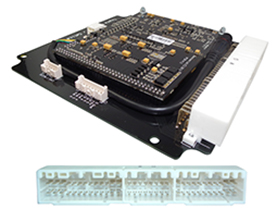 The G4+ plug-in ECUs are designed to be the most complete plug-in solution yet.

This Toyota MR2 plug-in ECU will save you time and money as they will plug straight into your vehicle’s original wiring loom without the need for messy adapter harnesses. It replaces the original circuit board inside the factory ECU enclosure and mounts using the factory brackets.  It is suitable for 3SGE powered SW20 (MR2 version 1) and the ST185 (in either naturally aspirated (NA) or turbocharged configurations using a manual transmission as detailed below. Automatics are not supported.

Once the installation is complete, the Link G4+ allows a good tuner to achieve an optimal state of tune to get the most out of any combination of modifications.

All Link G4+ plug-in ECUs come with a base map. While these maps are designed to help save time for you and your tuner, it is essential that these are used simply as a starting point for further tuning.

For naturally aspirated (N/A) versions the Link G4+ plug-in enables the removal of the air flow meter (AFM), the engine can easily be converted to speed density by removing the air flow meter and instead using the factory MAP sensor and the intake air temperature sensor (Note: not all of the 3SGE engines have airflow meters)

This ECU can also be setup to control boost with an external boost solenoid. This eliminates the need to purchase a separate electronic boost control system.

The vehicle’s original sensors & actuators are used except for the following exceptions:

An ignition expansion is provided allowing you to convert to a Direct Spark ignition system. Alternatively these outputs can be used to drive auxiliary devices.