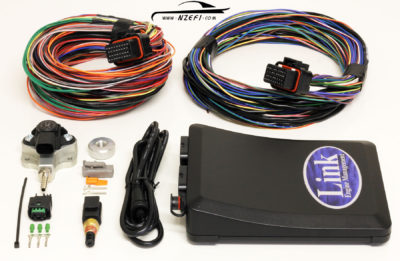 For applications requiring a wire-in ECU, NZEFI save you money and take out the guess work with these Link G4+ engine management packages.

With the Link G4+ Storm Black ECU having 8 injector drives and 8 ignition drives, this package suits many naturally aspirated or supercharged 4, 6 or 8 cylinder engines that do not require electronic throttle (fly-by-wire throttle) control or ‘peak and hold’ injector drives for large, low impedance injectors. Examples of typical applications include:

This package deal provides a saving of approx $160!

Wiring Loom Options – Buy what you need, not what you don’t

The Link G4+ Storm Black uses 2 looms, referred to as an ‘A Loom’ and a ‘B Loom’. For basic 4 cylinder applications, it is possible to use the ‘A Loom’ only. If additional inputs like closed loop knock control are required, or if the ECU is intended to be used on a 6 or 8 cylinder engine running coil-per-cylinder ignition and/or sequential injection, both the ‘A Loom’ and the ‘B Loom’ will be required.

In many cases, the second ‘B’ loom is needed for only a handful of functions, leaving much of the loom unused. As an alternative to the full 34-wire 2.5m ‘B’ loom, NZEFI exclusively offer a ‘stripped’ B Loom in a effort to lessen the expense of the wiring loom component of this package. The stripped B loom contains the 17 most commonly used wires terminated in the ‘B’ connector. These wires include:

These 17 wires are the same colours and to the same specification as those in the standard Link G4+ 34-wire B loom. The remaining unused locations in the connector are sealed off with blanking bungs.

If you are unsure about which looms you’ll need, please contact us.