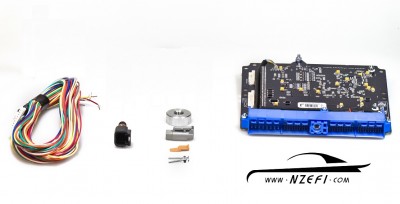 As Link progressively release new G4X plug-in ECU models to replace the discontinued G4+ versions, stock will be a mixture of G4+ and G4X during this transition. If the stock status in the drop down menu above is marked ‘out of stock’, that would suggest that the G4+ version is completely sold out, but we are yet to take delivery of the new G4X version. If you would like one of the G4X plug-in ECU’s, please contact us for the anticipated release date and updated pricing for the ECU model you require.

Link G4+ plug-in ECU’s are well renowned for simplifying the installation of an after market ECU.

NZEFI now take this a step further by offering Link G4+ Plug-in engine management packages, which include the all the extras required for your Link G4+ ECU install. These packages not only take out the guess work of what parts are needed, but also save you money when purchased as a complete package as listed below.

For further information on the specific G4+ plug-in ECU’s please refer to their individual product pages.

Note that some plug-in models (in general, those which have their own enclosure) are sold under the premium Vi-PEC brand, rather than as Link.

For further information regarding Link G4+ Plug-in ECU’s, please refer to the product pages for the individual ECU’s as outlined below.  We will be adding more of these over time, so if there is no product page for your ECU yet, please contact us and we will be happy to answer any questions you might have.

Mitsubishi EVO 1-3 4Bar Map on board

Mitsubishi EVO 4-8 4Bar Map on board

Mitsubishi EVO 9 4Bar Map on board