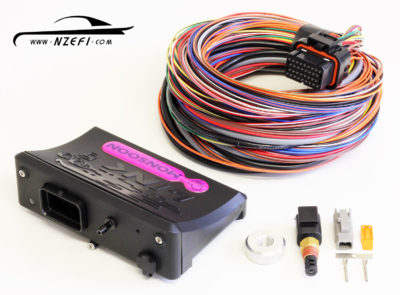 For applications requiring a wire-in ECU, NZEFI saves you money and takes out the guess work with these Link G4+ engine management packages.

The Monsoon sits between the entry level Atom II and the Storm Black in the Link G4+ wire in ECU range.  It is targeted for 4 cylinder engines requiring a few more inputs and outputs than the Atom provides, but not needing to the number of inputs/outputs found in the larger ECUs like the Storm, Xtreme, Fury or Thunder.  Unlike the Atom, the Monsoon can also control continuously variable camshafts and has features such as closed-loop boost control, anti-lag, launch control, fully functioned gear shift control.

With 4 injector drives & 4 ignition drives, this Link G4+ Monsoon ECU can run sequential injection and direct spark on a 4 cylinder engine. It can also run up to 12 cylinders using group-fire injection and a distributor or wasted spark (up to 8 cyl) ignition. The Link G4+ Monsoon has the following inputs and outputs:

This is enough for many applications, but if you require more inputs and outputs, a knock sensor input, electronic throttle control, or a built in wide-band controller then one of the higher end Link G4+ wire-in ECUs should be considered.

G4+ ECUs do not require the use of an air flow meter. The engine can be converted to speed density using a MAP and intake air temperature (IAT) sensor (both available separately). The G4+ Monsoon has an in-built 4 Bar MAP sensor which can be used by running a vacuum line from the intake manifold to the ECU. Alternatively, for the fastest possible response, an external MAP sensor can be used and wired to one of the user-configurable analog inputs.

While the G4+ Storm Black, Fury (6 cyl only), Xtreme or Thunder ECU’s are recommended for 6 and 8 cylinder engines, lower budget 6 and 8 cylinder applications can use the Monsoon with group fire injection and wasted spark ignition. This allows this package to be used in many instances on engines such as 1UZ-FE, 1JZ-GE, 2JZ-GE, RB20, RB25, RB30, VG30, VQ30 , VH41, VH45, Holden Ecotec V6, Ford 4L I6, Ford V8, Holden V8, Chev LS1, LS2, LS3, L98, LS7, BMW M50, M52, S50, S52 plus many more. Note that some of these engines listed are factory fitted with electronic throttle. In this case, either a mechanical (cable) throttle can be retrofitted (allowing the Monsoon to be used) or the electronic throttle can be retained by using the Link G4+ Fury, G4+ Xtreme or G4+ Thunder ECU’s instead. Also note that some of these engines listed are factory fitted with 4 or 6 terminal stepper motors for idle speed control – stepper motors are not supported on the Monsoon, but they are supported on all the higher end G4+ wire in ECUs (i.e. all except the Atom and Monsoon).

This package deal provides a saving of $95 off our individual retail prices!