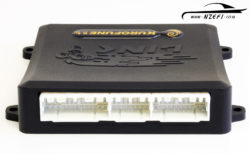 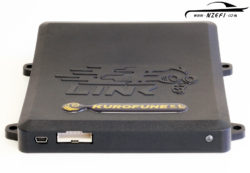 The Link G4+ Kurofune shares the same ECU header connector pinout as the HKS F-CON V Pro V2 (silver) and V3 (gold) engine management systems. This allows the G4+ Kurofune to be fitted to any vehicle with an existing HKS F-CON V Pro ECU with no, or very little wiring required.

The HKS F-CON V Pro was originally designed as a way of taking full control over fuel and ignition while leaving the factory ECU to perform more mundane tasks like control of the fuel pump, fan, idle speed control etc.  Installation was performed by using one of the many adaptor harnesses that HKS offered. Essentially these adaptor harnesses directed fuel and ignition wiring to the HKS ECU as well as sharing sensor wiring between both the factory ECU and the HKS ECU.  The F-Con V Pro ECUs also had analogue outputs to provide a simulated air flow meter signal to factory ECUs that originally had an analog based air flow meter (AFM). This feature allowed the factory AFM to be removed without upsetting the factory ECU. While HKS’s ECU could get the the job done for most of the 1990s applications that it was designed for, but it also had quite a few limitations.

With the Link G4+ Korofune,  existing HKS adaptor harnesses can be retained, but these restrictions can be easily eliminated.  The vastly superior Link tuning software ‘PCLink’ is also available for free and the same version of software can easily be switched between either English and Japanese language.

The Link G4+ Kurofune has the following inputs and outputs:

Viewed looking into ECU header (or wire side of loom connector)